It was a great pleasure to host fifty singers at Skilly Hills as part of the Burra Gospel and Soul Festivale. The choir is spending a week traveling around the Burra and Clare Valley districts singing in locations like wool sheds, cemeteries, chapels and many other places, several each day. Mostly they sing acapella gospel songs arranged and directed by choirmaster Tony Backhouse. Tony has years of similar events under his belt and has many followers. Some of the singers have been to two or three previous Festivales.

The enthusiasts crammed into our little chapel for an initial round of song, working on an uptempo version of Our Father. The song developed as various groups were given their roles until the chapel was filled with soaring song. So wonderful to hear. This next photo shows Tony in full flight, bringing in one section of the choir to accompany those behind him. 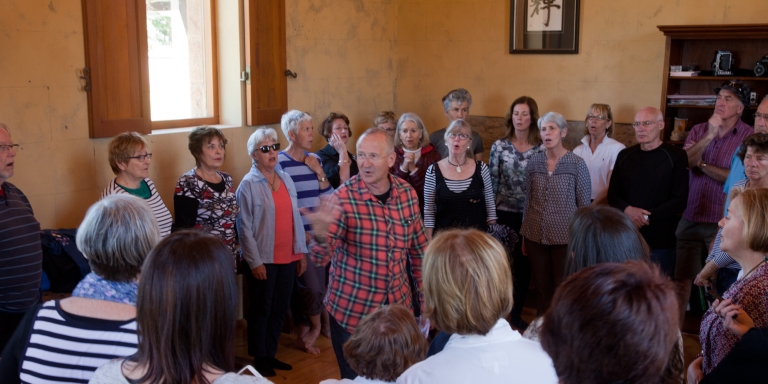 A second hour-long session of singing followed lunch and then the troupe climbed back in the bus for a trip to a wool shed in Burra. To more singing! It’s what these guys love to do and it was just wonderful to have our home filled with song. Thank you to all our guests. To give an idea of what it was like here is a short video shot by Chiggy.

Thanks for stopping by.

This is a text widget. The Text Widget allows you to add text or HTML to your sidebar. You can use a text widget to display text, links, images, HTML, or a combination of these. Edit them in the Widget section of the Customizer.
%d bloggers like this: